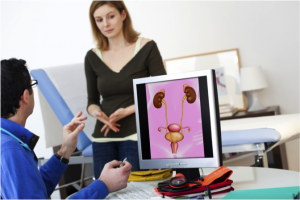 responsible for 90 percent to 95 percent of all cases. UCC is a cancer that can occur in other organs in the urinary system and grows out of the transitional lining of the kidneys and other hollow organs like the bladder. What’s included in the following statistics is the specific form of UCC that can be considered kidney cancer, which is called renal pelvis cancer.

Treatments for kidney cancer are dependent upon the stage of the disease but surgery is typically the fallback treatment. Chemotherapy and radiotherapy are not usually used as kidney

cancers do not often respond to such treatment. However, new radiation therapy treatments, such as the CyberKnife System, are showing effectiveness in treating kidney cancer with precise delivery of high-dose radiation.

Sometimes in surgery the entire kidney is removed but most tumors are amenable to a partial removal, or removal of only the infected area. However, surgery isn’t always possible as the tumor may have spread or there may be preexisting conditions that prevent this. Kidney cancer sufferers should talk to their doctors about viable alternatives to surgery.

Kidney cancer, like other forms of cancer death rates, is dependent on the stage in which it’s discovered. The most common symptoms are blood in urine, flank pain and weight loss. Diagnosis often takes into account a range of biochemical tests that may use blood or urine to analyze any differences in electrolytes, renal and liver function and blood clotting patterns. Physical examination may reveal an unidentified mass or an enlarged organ. As with many other cancers active surveillance is often the first step in treatment.